The Worst and the Best Day All Rolled into One 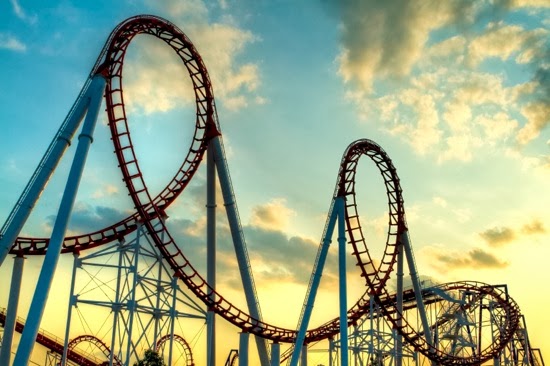 It is easy to get emotional whiplash from divorce. The process ushers in incredible emotional lows and even some highs. In the first few months, the negative feelings are often overwhelming, but, over time, the positives start to emerge again. I used to think that I had consistency in my life, and liked making long-term plans. Now, almost 14 months from the official demise of my marriage, I have discovered that my new normal is a bit of a roller coaster ride, and rolling with the punches is all part of learning to thrive. Some of the craziest days I have dealt with managed to cram dramatic highs and lows into only a few short hours. The day my ex announced his re-marriage, and my daughter heard about her early admission to college is a case in point.


Who gets married on a Thursday afternoon a couple of states away from the children? My ex, apparently. I knew the event was coming, but the actual news was still a bit of a mental shock. I heard on the morning of the nuptials. It was a couples-only activity—there was no ceremony for the kids to attend. It was hard for me because it put an exclamation point on the word divorced in my profile after being married for 21 years. Weird. Like many things about my divorce, I had no input, so I simply forged ahead. Despite the gloomy beginning to that Thursday, little did I know that the day was about to turn into one of my best ever.

The metaphorical sun came out at exactly 5:01 PM. My eldest daughter had applied early decision to my alma mater, Brown University. It had been her top choice for as long as I could remember, and she had enjoyed spending time there during each of the past four summers. Always fiercely intelligent and endlessly curious, she is the kind of girl who needs no structure, loves to learn and can develop and answer her own questions. Brown seemed like the perfect place.

As the clock ticked towards the time the university would alert students about their fate, the emotional impact of the remarriage news faded. However, the nervousness of learning whether my daughter had been accepted grew. She would be busy at her regular after school activities that afternoon, so she had given me her password information so I could discover the university's decision.

That afternoon, I tried to remain busy while working with my business partner and chatting with my youngest daughter at the office. Every hour or so, I blurted out the countdown. At 5, I logged on and found the right button to press. My partner huddled close to me on one side; my daughter grabbed my shoulder on the other. My hands shook as we began reading. Congratulations was the first word. I started jumping up and down and shouting. A moment later, I called my oldest to share the happy news. She was overjoyed. In a flash, what had started out as one of the worst days in recent months had turned into one of the most exciting and happy.

While everyone will experience divorce a bit differently, I think the emotional roller coaster is universal. In the first few months, my ride kept plummeting towards the abyss. Then, it began to, on average, flatten out. Highs and lows still came, but overall things looked up. A year later, I still experience a range of emotions, including some on the same day, but the trend is clear. Things are improving. I'm thriving again—a concept that my old self might not have imagined possible 10 months ago.

So, even if life has become a little more unpredictable, I know that I have grown stronger and more resilient. If you are in the early, dark days, things will get better. Rely on your friends and family; learn to take back control; and start to think about all the unexpected things you can do with your new life. You may not be getting off of the roller coaster anytime soon, but the fright will diminish, and the ride will make you smile once again.
Posted by Unknown at 4:36 PM