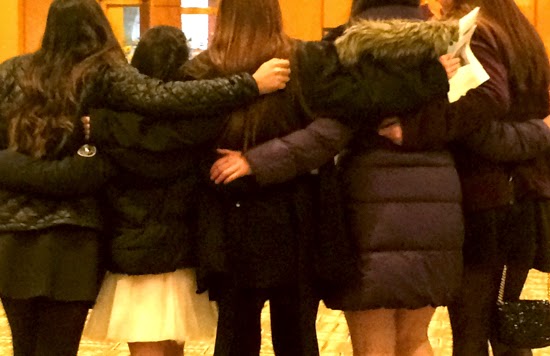 I walked up three steps to the bimah—the raised area in the front of the synagogue—toward my youngest daughter. Her father approached from the other direction. During my son's bar mitzvah four years ago, we had made this short trip together, holding hands. Besides a high school graduation, this was the first significant event that fully and publicly demonstrated the dramatic changes to my family since the end of our marriage. Later, I returned to my seat to sit between my other daughter and significant other, close to my sisters and parents. My ex settled in next to his new wife and step children; his parents were a row behind him. For some of the out-of-town guests, the scene must have been a bit startling. For me, it had become the new normal. I had learned that while my family had changed in unexpected ways, it was still strong.

An event like a bat mitzvah is extremely family-oriented, so I had no idea what it would be like after divorce. We had once been such a tight unit, but the dissolution meant that I now had an ex, ex-in laws, and lots of friends, old and new, who had remained loyal and close. People say they won’t take sides, but it’s natural that they end up mostly in one circle or another. Since I was orchestrating the entire day, dealing with the realities of a re-defined family landed squarely in my lap.

Certainly, my ex would be part of the ceremony, and his parents were still grandparents, so it was a no brainer that they would be included. But it was an odd experience adding my former spouse’s new wife and step children to the invitation lists. It really hammered home the point that my ex and I were no longer on the same team. We had transitioned to two individuals that shared a daughter, but little else these days, besides memories and legal disputes, which were painful. This day, though, was all about my youngest child, so any negative feelings were put aside in order to focus on what was truly important—making sure this rite of passage was as wonderful as possible for her.

On the morning of the ceremony, I wondered how the interactions between my current and ex family members would go. And it wasn’t just me who wondered. Before the service, I heard ushers discussing whether each of the parents should sit on separate sides of the temple like they do at a wedding. The two families did end up on opposite sides, though that appeared to be mostly because my ex and I had already selected our rows across from each other.

But what about meeting my former in-laws in person? I had talked to them once when my ex had left, but I had not seen them since. So, it was a surprise when my ex mother-in-law and sister-in-law sweetly expressed that they missed seeing me. As for my sisters and parents, they had seen my ex at various events, but it was still interesting to see how they dealt with him knowing all the details of the split and post divorce interactions. Some avoided him, others settled into old routines of polite small talk, and one took the opportunity to express disappointment about the way things had turned out. Truthfully, at first, I did not like seeing some of the more positive interactions, but my mother wisely reminded me to focus on the good things, and she was right.

When the time came for my ex and I to give our speeches about our daughter, we stood on either side of her. Moving back a few steps, I gave him his moment to speak about our child. When it was my turn, he gave me the same courtesy. I enjoyed my chance to sing her praises. Watching the smile spread across her face meant the world to me. Afterwards, we left the bimah, each going a different direction to our separate seats. My ex and I had been cordial, respectful, relatively close together and yet obviously distant. I hear that some people remain friends even after a divorce, but it seems like for most people I know, distance without drama is a pretty good achievement.

Over all, I judge the day a great success, mainly by the comments of my daughter. What a relief. During the year or so of preparation, I had worried about two things. First, the planning. Second, the family situation.

While married, I had deferred to my ex on many logistics and travel arrangements. Since then, I had learned to handle chores like that, but was nervous about planning such a major event with multiple locations and hundreds of details on my own. Previously, my ex and I had discussed everything—venues, speeches, invite lists, table settings, etc. This time, I was in charge. It turns out that I could handle it all, and, of course, despite my divorce, I was not entirely on my own. I managed the event, but whenever I needed advice or support, I had my daughters, my sisters and mother, and my friends.

As for the changed family situation, the reality is that divorce does entail some significant changes. There’s no use denying that. But while I had lost a husband and in-laws, my immediate family and my children are as strong as ever. Sure, things are different, but my family has adjusted. None of us could have imagined this stumbling block in our path, but we have regrouped.

You might not have a bat mitzvah coming up, but you will have some major events where you will be fully in charge and your new family dynamics will be on display for all to see. Like me, I think you will find that in the most tumultuous, early months of a separation, you might not think you are capable of being successful and your family might feel overwhelmed by stress. But, like us, I’m sure you and your loved one will learn to thrive.