About Bangability: What We Can Learn from Amy Schumer and Some Angry Men 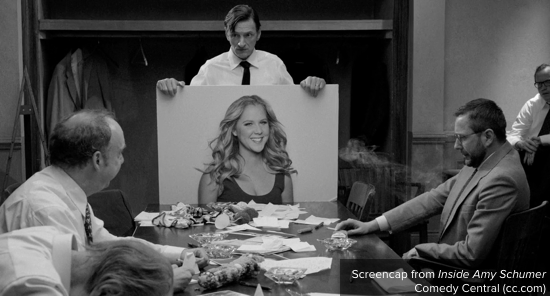 When my ex walked out the door after having an affair, one of the first questions I asked myself was, "Am I still desirable?" This thought may come across as shallow, but I couldn't help questioning some of the basics during a crisis. It reminded me of an Amy Schumer skit I recently re-watched that was just hysterical. In "12 Angry Men Inside Amy Schumer," a group of male jurors in a nod to the famous film are deliberating over the pressing issue of whether or not Amy is hot enough to appear on television—basic cable, that is. The answer is yes ... though only after a drawn out and contentions argument.


It's natural to wonder how hot you are after a split, so Schumer strikes a chord with many women soldiering through a divorce or break up when she poses this question about herself. While women always like to look great, they are not on display in the same way during marriage as they are when single. However, it's all for real once you are divorced and (back) in play. In my case, the last time I had been on the market, I was much younger and a recent college graduate. Suddenly single, my beauty budget for hair care and cosmetics, among other things, was going way up!

While questioning oneself seems unavoidable, it's important to not take it too seriously and laugh at the issue as Schumer does. Women often feel judged on their looks in American culture, so this is nothing new for us ladies. For instance, after Bruce Jenner came out as Caitlyn, Jon Stewart ridiculed the media on the Daily Show for saying how brave she was to come out as female but then immediately scrutinizing her body and hotness. Her personality and character were not newsworthy, but whether she was bangable was the only item on the agenda.

Worrying about perceived looks tends to be a waste of time for women, but many of us do it even though most of those judging shouldn't warrant our interest. This is another point the Schumer skits nails. The entire debate of her hotness centers around what a bunch of hypocritical mysogynists think. In real life, at a typical bar, many if not all of the men who would be judging a woman most harshly are people she really would not be interested in anyway. While it may be easier said than done, we should all try to limit the impact of these views. If we do that, the ones whose opinions we really care about will likely see us as we see ourselves: proud and confident, with much to offer.

So, rather than getting hung up on looks alone, you should focus instead on doing the things that make you feel good, accepting your new situation and making the realistic changes you are willing to initiate. Hitting the gym never hurts, but spending time with supportive family and friends who have your back is the real priority. Don't overlook the basics: focus on eating healthier and getting more sleep. While it may seem inconsequential, sleep is often cited as a key ingredient in staying healthy (Arrianna Huffington has written extensively about his topic).

Finally, it's also important to focus on your mental health. If you have the resources, it's great to spend some time with a therapist trying to learn lessons from your split. Examine what you can take forward so that you can build a positive relationship in the future.

Note: If you love the skit, be sure to check out Amy's book, The Girl with the Lower Back Tattoo, for more insight and humor.